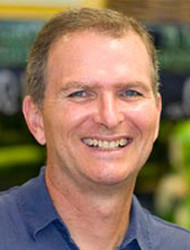 Mark Fergusson is Chief Organic Officer, and also Chief Executive & Chief Financial Officer of Down to Earth, one of Hawaii’s leading natural & organic food store chains. The company has six locations: Honolulu, Kailua, Kaka‘ako, Pearlridge, and Kapolei on Oahu; and Kahului on Maui.

Mark moved to Hawai'i in 1991 to join Down to Earth to take the opportunity to work for a company in harmony with his personal values, a strong commitment to organic food production, sustainability, and healthy living – including the promotion of a vegetarian diet.

Born and raised in Sydney Australia, Mark received a bachelor’s degree in economics from Macquarie University and is a fellow of CPA Australia.

Mark is President and a director of HOFA (Hawai’i Organic Farming Association); is a founding member of Label It Hawaii, and speaks on the need for GMO labeling; serves on the advisory board of the Vegetarian Society of Hawai’i; and, has served as a volunteer mediator for the Mediation Center of the Pacific. He resides in Kailua with his wife Sandy. They have three children – two sons and a daughter.

COVID-19 News, Down to Earth News

Updates from the team at Down to Earth Organic and Natural.

New Kupuna Store Hours at All Down to Earth Locations

Aloha, to help our keep our Kupuna safe during this COVID-19 emergency, our stores will start offering Kupuna Hours at all locations.

COVID-19 News, Down to Earth News

Our Hot Bar and Salad Bar are open with a twist! These items have been prepackaged for your safety. Other items also now packaged: Baked Goods, Pizzas and more. We'll also have a wide range of grab & go items available including Sushi. Be on the lookout for your favorites and maybe some new goodies!