Good for Your Health, Good for the Planet and Animals, too! 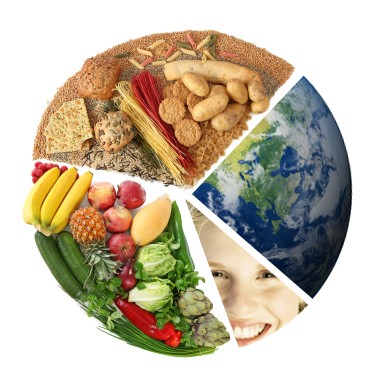 If you think going green simply means environmental responsibility, consider thinking outside the box. At Down to Earth, we strongly believe that the single most important thing an individual can do for their health and for the sake of the innocent animals—as well as the environment—is to adopt a vegetarian diet.

Good for Your Health

Leading health experts agree that going vegetarian is the single-best thing we can do for ourselves and our families. Healthy vegetarian diets support a lifetime of good health and provide protection against numerous diseases, including our country’s three biggest killers: heart disease, cancer, and strokes. The American Dietetic Association states that vegetarians have “lower rates of death from ischemic heart disease; ... lower blood cholesterol levels, lower blood pressure, and lower rates of hypertension, type 2 diabetes, and prostate and colon cancer” and that vegetarians are less likely than meat-eaters to be obese.1

Well-planned vegetarian diets provide us with all the nutrients that we need, minus all the saturated fat, cholesterol, and contaminants found in animal flesh and eggs.

Research has shown that vegetarians are 50 percent less likely to develop heart disease, and they have 40 percent of the cancer rate of meat-eaters.2, 3 Plus, meat-eaters are nine times more likely to be obese than are vegans.4

The consumption of meat has also been strongly linked to osteoporosis, Alzheimer's, asthma, and male impotence. Scientists have also found that vegetarians have stronger immune systems than their meat-eating friends; this means that they are less susceptible to everyday illnesses like the flu.5 Vegetarians and vegans live, on average, six to 10 years longer than meat-eaters.6

A plant-based diet is the best diet for kids, too: Studies have shown that vegetarian kids grow taller and have higher IQs than their classmates, and they are at a reduced risk for heart disease, obesity, diabetes, and other diseases in the long run.7, 8 Studies have shown that even older people who switch to a vegetarian or vegan diet can prevent and even reverse many chronic ailments.

Good for the Planet

Studies show that vegetarian, organic diets have the smallest environmental impact while the single most damaging foodstuff is beef.9 All non-vegetarian diets require significantly greater amounts of environmental resources such as land and water.

America's meat addiction is poisoning and depleting our potable water, arable land, and clean air. More than half the water used in the United States today goes to animal agriculture. Farmed animals produce 130 times more excrement than the human population and the run-off from their waste fouls our waterways. Animal excrement emits gases that poison the air around farms.10 In its 2006 report, the United Nations said raising animals for food generates more greenhouse gases than all the cars and trucks in the world combined. Most of it comes from carbon dioxide and methane gas generated by manure.11

The negative effects of the meat industry are far reaching.

Forests are being bulldozed to make more room for factory farms and feed crops to feed farmed animals, and this destruction causes soil erosion and contributes to species extinction and habitat loss. Raising animals for food also requires massive amounts of food and raw materials: Farmed animals consume 70 percent of the corn, wheat, and other grains that we grow, and one-third of all the raw materials and fossil fuels used in the U.S. go to raising animals for food.12

Whether it's unchecked air or water pollution, soil erosion, or the overuse of resources, raising animals for food, is wreaking havoc on the earth. There is no bigger blight on the face of the earth than the massive industrial scale factory farms and their associated brutal slaughterhouses.

For the Sake of the Innocent Animals

One of the most important and least understood benefits of a vegetarian diet is protection of the innocent animals. A vegetarian diet helps save animals from cruelty, suffering and brutal death—a staggering 10 billion animals are killed in the USA every year.

Given the suffering these animals endure, and given that all our nutritional needs can easily be satisfied without eating these animals, vegetarianism is morally required. The fact is that eating animals is unnecessary because nature has provided ample vegetables, fruits, grains, legumes and dairy products for human sustenance. Therefore, the slaughter of animals for food is a luxury rather than a necessity and is morally wrong."

Down to Earth's slogan captures this sentiment in its universally appealing slogan, "Love Life!" (Love animals, don't eat them).