A Time to Give Thanks: The Vegetarian Way 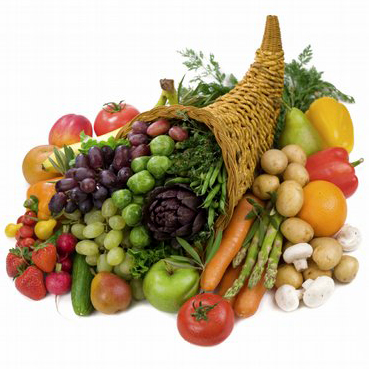 Isn’t it wonderful that Mother Nature has given us all the plants we need to meet our nutritional requirements without having to slaughter animals for food ...and that in doing so, we improve our health and contribute to a cleaner and safer environment!

This is one of the most important—and least understood--reasons for which we have to give thanks. It's one of the reasons why a few friends of mine will join together again this year to hold a vegetarian Thanksgiving feast. It’s their way of giving thanks. Just thinking about it has my mouth watering.

To feed the hundred-plus people that show up every year, they'll be having their famous knock -your-socks-off mock turkey tofu, mashed potatoes and garbanzo bean gravy, green beans with cashews, sweet potato pecan casserole, homemade rolls, fresh salad with greens from our garden, a pineapple-cranberry mold, pumpkin pies and lilikoi cheesecakes. Yum! Thanksgiving celebrates a day of abundance, and as we dish out plates bigger than our heads to all our guests, I often reflect how lucky we are that Mother Nature has provided us with all the nutrition we need to live happily and healthily without causing suffering to other living entities.

Many people think this isn't possible, and that the only way to get adequate protein in their diet is to eat meat. I even met a man who wanted to stop eating meat for ethical reasons, but because he had two small children, he was afraid of compromising their health. The idea that protein is only available in animal flesh is so widespread and unfounded that many have come to call it "the protein myth." In fact, plant foods are rich in protein and there is no danger of becoming protein deficient while eating a well-balanced plant-based diet (See "The Great Protein Myth,").

Many health experts, including one of the world’s leading experts on protein, Joe Millward, PhD, Professor of Nutrition, University of Surrey (UK) confirms that plants contain all the essential amino acids in adequate quantities to meet the needs of humans, including children.1 Furthermore, according to the American Dietetic Association, "Well-planned vegan and other types of vegetarian diets are appropriate for all stages of the life cycle, including during pregnancy, lactation, infancy, childhood and adolescence... Vegetarians have been reported to have lower body mass indexes than non-vegetarians, as well as lower rates of death from ischemic heart disease; vegetarians also show lower blood cholesterol levels; lower blood pressure; and lower rates of hypertension, type 2 diabetes, and prostate and colon cancer."2

Even the New York Times is experimenting with a healthy holiday with their Eat Well Vegetarian Thanksgiving series. Author Tara Parker-Pope, who is focusing on a new recipe from a famous chef every day of November until Thanksgiving, hopes to give her readers "new vegetarian recipes that may quickly become old family traditions." One of the featured chefs, Chloe Coscarelli, emphasizes, “You don’t need animal products to capture the spirit and savory flavors of Thanksgiving on your table." And what better way to say thanks to Mother Nature? After all, it's "green" to go veggie! Think about it.

Through factory farms, America's meat addiction is poisoning and depleting our potable water, arable land, and clean air. More than half of the water used in the United States today goes to animal agriculture. Since farmed animals produce 130 times more excrement than the human population, the run-off from their waste is fouling our waterways. Animal excrement emits gases, such as hydrogen sulfide and ammonia that poison the air around farms, as well as methane and nitrous oxide, which are major contributors to global warming.

In its 2006 report, the United Nations said raising animals for food generates more greenhouse gases than all the cars and trucks in the world combined.3 Most of it comes from methane gas generated by manure.

The negative effects of the meat industry are far reaching. Forests are being bulldozed to make more room for factory farms and feed crops to feed farmed animals, and this destruction causes soil erosion and contributes to species extinction and habitat loss. Raising animals for food also requires massive amounts of food and raw materials: Farmed animals consume 70 percent of the corn, wheat, and other grains that we grow, and one-third of all the raw materials and fossil fuels used in the U.S. go to raising animals for food.

Whether it's unchecked air or water pollution, soil erosion, or the overuse of resources, raising animals for food is wreaking havoc on the Earth. So, this Thanksgiving, let us reflect on the value of a plant-based diet, which awakens our spirit of compassion and leads us to a kinder and gentler society in which we exercise a moral choice to protect animals, not exploit them.

Wherever you spend Thanksgiving, at your own home or with friends, family, or new acquaintances, I hope you'll enjoying a turkey-free Thanksgiving feast and discover new recipes that become old favorites. The turkeys will thank you; your body will thank you, and Mother Nature will thank you for choosing a compassionate way to celebrate this Thanksgiving.

A Thanksgiving for the Earth

Go vegetarian – Eating vegetarian is the single most important thing you can do for the planet. In fact, in its 2006 report, the United Nations said raising animals for food generates more greenhouse gases than all the cars and trucks in the world combined. The negative effects of the meat industry are far reaching. Forests are being bulldozed to make more room for factory farms and feed crops to feed farmed animals, and this destruction causes soil erosion and contributes to species extinction and habitat loss. 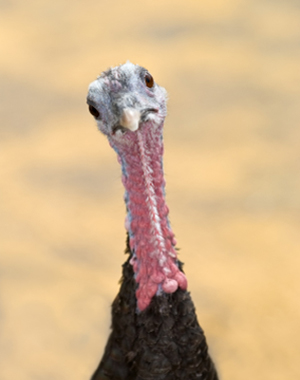 As we plan menus for this year's Thanksgiving dinner, consider that a vegetarian lifestyle awakens our spirit of compassion and guides us towards a kinder, gentler society in which we exercise a moral choice to protect animals—not exploit them.

So why not celebrate this year’s Thanksgiving with a turkey-free dinner? Each year, over 5 million turkeys are raised under horrible conditions and then slaughtered for holiday feasting. What a great opportunity to protect animals, by reducing so much pain and suffering. Just skip the buzzard!