Are GMOs Safe To Eat? 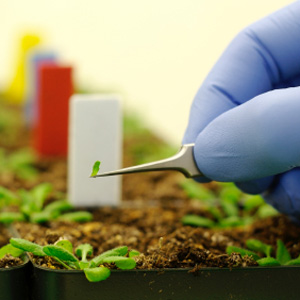 Since the dawn of time, human beings and animals alike have asked the question every day, “What should I eat?” We need to know not just what tastes good, but what is good for our survival and for our long-term health. We employ our sense of smell, taste, sight and touch, our intelligence, our knowledge of cause and effect and our culture to help us decide what to eat.

These days, most people think the answer is pretty simple. To the question, “what should I eat?” the answer “anything in the supermarket” would satisfy most. But what if 75-90% of the food in the supermarket had been changed on a molecular level in a way you couldn’t detect, and which had largely unknown and potentially dangerous side effects? Wouldn’t you want to know? Wouldn’t you want a choice?

A growing body of food safety advocates, scientists, teachers, doctors and food retailers want a choice, and they are working hard to educate the public about the need to demand strict labeling laws regarding the production and sale of genetically modified ingredients. So what are GMOs and why should you be concerned? Here are some straightforward answers that dispel many of the myths surrounding GMOs:

Q: What is a GMO? A: GMO stands for Genetically Modified Organism and refers to a plant or animal whose genetic structure has been modified by injection of a foreign DNA. GM foods may also be referred to as GE or Genetically Engineered.

Q: Isn’t genetic engineering basically the same as crossbreeding, which people have been doing for centuries? A: No. This relatively new science allows DNA from one species to be injected into another species in a laboratory, creating combinations of plant, animal, bacteria, and viral genes that do not occur in nature or through traditional crossbreeding methods. GMOs are problematic because the science of genetic modification is based on the faulty premise that DNA is static, and that it is therefore possible to take pieces out and put pieces in with precision and control, impacting only the chosen genes. However, recent studies have shown that DNA is dynamic, meaning that if one gene is manipulated, those changes can and do affect other genes in ways scientists do not fully understand.1, 2

Therefore, when using GM techniques, there is really no way to know what kind of outcome you will get. Allowing large-scale production of plants with untested and unpredictable genetics presents significant risk to human health, environmental well-being, and worldwide food security.

Q: Weren’t GMOs developed to help feed the world? A: No. Although the biotech industry has spent a lot of money trying to convince people that genetic engineering is in the best interest of the consumer and the farmer, in fact no GM traits are in commercial production for increased yields, drought tolerance or nutritional superiority. 90% of the world’s GMO seeds are sold by Monsanto, the same company that sells the Roundup® to spray on them, and the same company that brought us DDT. 75% of GMO crops grown are bred for herbicide tolerance (e.g. “Roundup Ready” crops). The majority of the rest are bred to produce the pesticide Bt in their DNA.2

Q: Don’t GMOs help reduce pesticide use? A: No. Because of the GM Roundup Ready trait, there has been a 15-fold increase in the use of glyphosate (the active ingredient in Roundup) on the major field crops since GMOs were introduced.3 This heavy spraying has led to the rise of “super-weeds”—weeds that are Roundup tolerant. To deal with that, farmers are now being told to spray 2-4D (a highly toxic herbicide) in addition to Roundup. The super-weed problem reached epidemic proportions in 2010 and has been covered in mainstream media outlets like The New York Times and The Wall Street Journal. Because of the Bt crops, there are also now “superbugs” that are resistant to Bt insecticide.

Q: Don’t the FDA and the USDA oversee the production of GMOs? Haven’t they done testing for safety? A: No. According to a report in Reuters last year, “the U.S. government conducts no independent testing of these biotech crops before they are approved, and does little to track their consequences after…. the United States has never passed a law for regulating genetically modified crop technologies.” Furthermore, “a string of federal court decisions found its officials acted illegally or carelessly in approving some biotech crops.”4

Q: Aren’t GM foods still relatively rare? A: No. The Grocery Manufactures Association estimates that roughly 75% of all conventional, processed food contains genetically modified ingredients.5 So, while less than one third of respondents in a Rutgers survey believed they had consumed GM food,6 the reality is that unless you are vigilant about your food sources and educated about which foods to avoid, chances are you eat GMOs on a regular basis.

Q: How can I avoid eating GMOs? A: The four most common GM ingredients are conventional soy, canola, corn, and beet sugar. Between 80-90% of these crops are genetically modified, and they end up in almost every processed food on the shelves and in restaurants. Eating whole, unprocessed organic food is a good first step to avoid GMOs. However, because plants can so easily experience cross-contamination, there is no guarantee that even organic foods are GMO-free.

As manufacturers begin to include the “Non-GMO Project Verified” logo on their packaging, you will see more and more of the verified products on Down to Earth's. Consumers have the right to choose what foods to eat and feed their families. This Non-GMO logo enables consumers to exercise this right!

I join Down to Earth in calling on Congress to support labeling of foods that contain GMOs. For more information visit The Non-GMO Project

Down to Earth and GMOs Down to Earth is opposed to the development of products containing GMOs because we believe they may pose health, safety, and other potential risks that far outweigh the purported benefits.

A Suggestion for Evaluating GMO Technology: "Dangerous Until Proven Safe."

The Supreme Court began hearing arguments yesterday appealing a 2006 ruling in favor of Northern California organic alfalfa growers. In Monsanto Co vs Geertson Seed Farms, Phillip Geertson and other producers of organic alfalfa argued that nearby production of Monsanto’s Roundup Ready alfalfa threatened to cross-contaminate their crops. This will be the first case involving GMO crops accepted by the Supreme Court.