Taking Off the Pounds Made Easy! 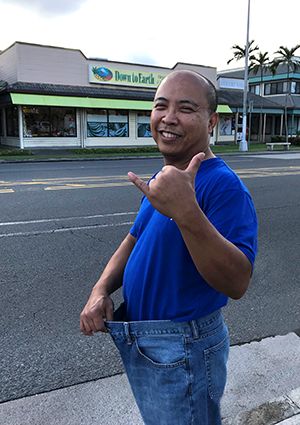 Here we go, one more time! It’s January so that means another resolution to eat healthier and lose weight. Somehow ya’ gotta get rid of those extra five to eight pounds from holiday feasting!

An easy way to do this is to do what Armando did. He’s our night shift manager at the Down to Earth store in Kailua. Since coming on board almost 1½ years ago, he lost 50 pounds! No, we didn’t work him to extreme. All he did was substitute his usual meat-based dinner for a plant-based one. That’s it!

“My dinners were usually stir fried meat and vegetables drenched in oil with plenty of salt and all the rest,” says Armando. “Or it was pork adobo or some other meat with potatoes or rice. It seemed I couldn’t have a meal without rice. Breakfast included tocino. These are thin strips of pork that sit for several hours (or days) in a mixture of sugar, salt, garlic, and oil, and then fried up in a hot pan until the coating caramelizes. And rice!”

“It was yummy,” says Armando.  “But not so good for my weight or my overall health.”

“I never used to think about it,” says Armando. “But since I started working at Down to Earth I found myself opting for a healthy plant-based meal from the company’s deli salad bar and hot table. At first, it was just convenient because dinner is in the middle of my shift. As time passed by, and I kept adjusting my belt one more notch tighter, I realized it was due to the plant-based dinner I was having every night. My waistline dropped from size 38 to 32. I look better and feel healthier. Now I'm a believer!”

“My doctor asked what did I do? I explained and he said to keep on doing it. Now instead of seeing him three times a year, I see him only once.”

None of this came easy to Armando. He was raised on the traditional meat-based diet typical of Pampanga, a province in the Central Luzon Island of the Philippines. His Chinese grandmother favored traditional stir-fried vegetables with lots of oil and meat. His father worked for the U.S. Department of Defense as chief cook of Clark Air Force Base in Luzon. No vegetarians there.

“I really didn’t think much about a plant-based diet. How would I get protein? Working at Down to Earth, I now see firsthand how easy it is do. I found out all vegetables have protein.”

“Think about it,” one of my vegetarian friends said. The biggest land animals are plant eaters. In prehistoric times, this included a wide variety of huge dinosaurs. Today, the ten biggest and strongest land animals are all herbivores. The elephant, white rhinoceros, hippo, giraffe, horses, bulls, and cows.

“And where do they get their protein? Well, plants of course! If these large animals with big, strong muscles can get adequate protein from plants, then so can we,” he said.

“You don’t need to do anything drastic,” says Armando. “A little bit at a time. I only changed one meal and now I have a healthier life and better prospects for a longer life with my daughter.”

The key is variety. As a general guideline, aim to have your daily intake of whole grains, vegetables, and legumes to easily meet your protein needs. Dairy products, although not plant-based, also provide significant amount of protein and can be a part of a balanced plant-based diet when consumed in moderation. Veggie meats or meat substitutes are also great sources of protein. During the past few years there’s been an explosion of new vegetarian meat substitutes on the market that look and taste very close to the real thing—without all the bad stuff. In fact, with major U.S. food manufacturers increasingly adding veggie burgers and other veggie meals to their lineups, it’s likely that many meat eaters will reduce consumption in 2018. Well, at least a little, eh? But 50 pounds... think about it!

If you don’t cook or want a quick and healthy meal, you must try those wonderful tasty and delicious dishes on the Down to Earth Deli hot bar.

The fact is that eating meat is unnecessary because nature has provided ample vegetables, fruits, grains, legumes and dairy products for human sustenance. For more information check out this article on the Down to Earth website, "Do Vegetarians Get Enough Protein?"

Down to Earth Cookbook

$19.99 In Down to Earth stores—Local Every Day Local Price 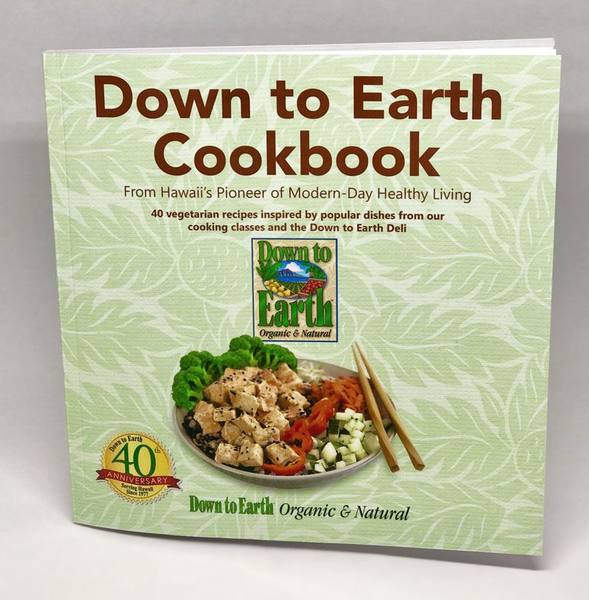 Down to Earth’s first cookbook is a soft-cover 112-page book that includes 40 vegetarian recipes, one for each year of the company’s history, and beautiful pictures of each dish.  The recipes are a collaboration by vegetarian chefs of the Community Outreach Team at Down to Earth.

“We have always been an all-vegetarian store, and our signature offering is our deli, says Mark Fergusson, Down to Earth CEO. “So it was natural that we celebrate our 40th anniversary with a cookbook.”

Click here to learn more about the new Down to Earth Cookbook.