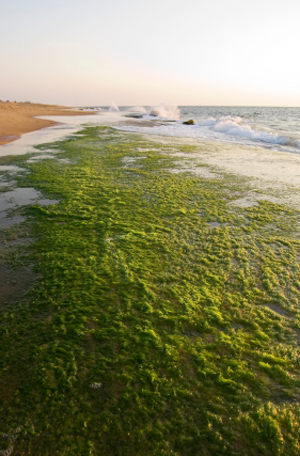 The basic principle of organic farming is to work with the natural environment, rather than against it, employing Earth-friendly techniques that eliminate the use of chemical fertilizers and pesticides. Organic methods are widely recognized as protecting land, ecosystems, consumers, farm workers, and communities from the hazards of exposure to toxic agricultural chemicals.

But did you know that organic farming can also play a life-or-death role in the sea? Recent studies reveal that the widespread use of chemical fertilizers in agriculture is causing the suffocation of marine life, the starvation of fish, and the creation of large oceanic “dead zones.” Chemical fertilizers leach from farmlands into rivers, and then into the sea, where they cause massive algae blooms. When the algae die and decay bacterial action occurs, depleting the water of oxygen. Heavy, oxygen-deficient water sinks to the ocean floor, and bottom-dwelling organisms – those that sustain creatures up the food chain – are asphyxiated. The disastrous result is that lower marine organisms disappear, fish starve, and "dead zones" form in the sea.

In the past twenty years, oxygen-depleted areas in the tropical Pacific and Atlantic have expanded significantly in size, and the number of global oceanic dead zones has increased from 162 to 405. Researchers now agree that chemical agriculture poses as great a threat to marine life as over-fishing and habitat loss.

Robert Diaz, of the Virginia Institute of Marine Science, College of William and Mary, and his colleague, Rutger Rosenberg of the Department of Marine Ecology at the University of Gothenburg, call for a change in agricultural practices to address the problem. In the journal Science, the two researchers say the dead zones are a major environmental threat worldwide, writing that "There is no other variable of such ecological importance to coastal marine ecosystems that has changed so drastically over such a short time." They report that keeping chemical fertilizers out of the sea is our best recourse.

What you can do