VSH Lecture: How Not to Go Extinct

VSH Lecture: How Not to Go Extinct 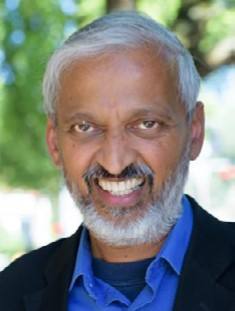 This talk examines the top causes of premature extinction on Earth - climate change, biodiversity loss, ecosystems collapse, chemical pollution and more, and explains how a nonviolent Eco-Vegan lifestyle mitigates all of these causes. It advances the hypothesis that an ecosystem’s role for human beings as the "Thermostat Species" is in harmony with scientific facts as well as with the foundational stories of major cultures. With strong scientific evidence, it shows why we need to transform to a largely Vegan World to continue fulfilling this ecosystems role as compassionate "Climate Healers" by 2026, seven short years from now, or risk our own extinction.

Dr. Sailesh Rao is the Founder and Executive Director of Climate Healers, a non-profit dedicated towards healing the Earth’s climate. A systems specialist with a PhD in Electrical Engineering from Stanford University, Stanford, CA, USA, conferred in 1986, Dr. Rao worked on the Internet communications infrastructure for twenty years after graduation. In 2006, he switched careers and became deeply immersed, full time, in the environmental crises affecting humanity. Dr. Rao is the author of the 2011 book, Carbon Dharma: The Occupation of Butterflies and the 2016 book, Carbon Yoga: The Vegan Metamorphosis. He is an Executive Producer of the trilogy of documentaries "THEY Don't Want You To See", The Human Experiment (2013), Cowspiracy: The Sustainability Secret (2014) and What The Health (2017), which explore the systemic causes of human and environmental ill health. He is also an Executive Producer of the new groundbreaking documentary, "A Prayer for Compassion".

FREE Admission & Refreshments
Refreshments courtesy of Down to Earth.
University of Hawai‘i at Manoa (UHM) events are co-sponsored by the Osher Lifelong Learning Institute at UHM (OLLI), the Department of Linguistics (DoL) at UHM, and the Institute for Sustainability and Resilience (ISR) at UHM.