Say No to Factory Farms: A Triple-Win Solution | Down to Earth Organic and Natural

Say No to Factory Farms: A Triple-Win Solution 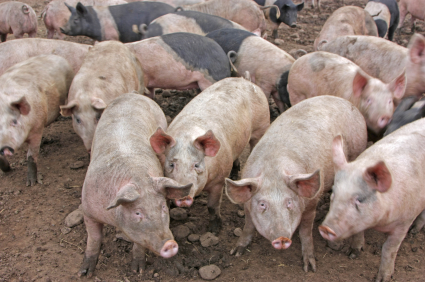 Huge factory farms, known in the industry as “Confined Animal Feeding Operations” (CAFOs), raise thousands of animals under severely crowded conditions for the purpose of slaughter. CAFOs have long been recognized by scientists as potential sources of new and dangerous influenza viruses that could infect humans. "These mixing bowls of intensive operations of chickens and pigs are contributing to speeding up viral evolution,” says Ellen Silbergeld, a leading researcher of pathogen evolution in CAFOs and professor of environmental health sciences at Johns Hopkins Bloomberg School of Public Health. Recent outbreaks of swine and avian flu affirm that CAFOs are a threat to public health. However meat production also threatens our planet’s health – it’s the number one cause of global environmental damage. In choosing a vegetarian diet you can help the world to:

In its 2006 report, the United Nations said raising animals for food generates more greenhouse gases than all the cars and trucks in the world combined. Most of it comes from methane gas generated by manure. Reducing demand for meat could rapidly lower atmospheric gases that are key contributors to global warming.

Save vast amounts of water

Producing a pound of soy requires approximately 250 gallons of water, and a pound of wheat only 25 gallons. However, it takes a whopping 2,500 gallons to produce a pound of beef, a tremendous waste in our water-short world.

Farmed animals produce about 130 times as much excrement as the entire human population of the US, yet CAFOs and factory farms don't have sewage treatment systems. Manure, antibiotics, growth hormones, fertilizers, pesticides, and other livestock-related effluents pollute rivers and streams, and they enter the human food chain through water supplies.

Reduce the loss of wildlife habitat and biodiversity

Clearing land to create pasture or grow animal feed results in deforestation, ecosystem destruction, and the incalculable loss of plant and animal species (and also releases vast CO2 stores). Today, 30% of the earth’s entire land surface – or 70% of all agricultural land – goes to supporting livestock.

The production of animal flesh requires up to three times as many resources as the production of plant foods, while causing pollution, global warming, habitat destruction, species loss, water conflicts, and strains on land use. A vegetarian diet is our best step toward environmental sustainability.

What you can do

Say “NO” to meat production and CAFOs by adopting a plant-based diet. You will be protecting public health, preventing the extreme suffering of animals, and caring for the planet every time you eat. It’s a triple win-win solution to serious global challenges.