Down to Earth Wins Best Health Food Store 11 Years in a Row! 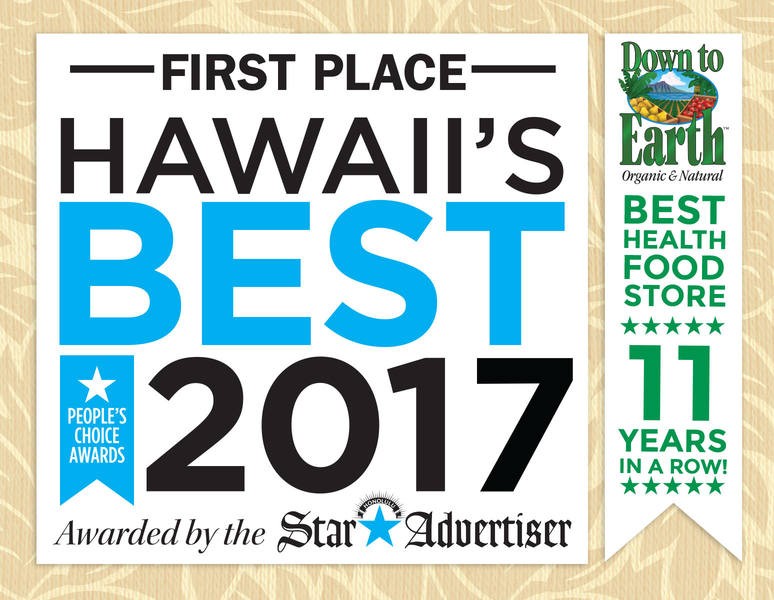 “We are honored and humbled to have won this award yet again,” said Mark Fergusson, Down to Earth Chief Executive Officer.  “This accomplishment is due to our customers’ loyal support, our team members’ hard work and dedication, and our commitment to providing quality products and excellent service. It is an honor and a privilege to serve the people of Hawaii by providing the best products with the best customer service.”

Fergusson explains that Down to Earth’s vision of helping to improve the health and wellbeing of Hawaii island residents traces back to its start on Maui in 1977, when a group of friends started the company’s first store.  They wanted to help people improve their health by making available organic and natural products at affordable prices and educating about the many benefits of living a vegetarian lifestyle.

“On the occasion of our 40th Anniversary, we are pleased by the recognition of our efforts and thank Hawaii’s residents for their confidence in Down to Earth,” added Fergusson.

About Down to Earth

Down to Earth Organic & Natural was founded in 1977 when a group of like-minded friends in Wailuku, Maui, turned their enthusiasm and passion for organic and natural foods—and their vegetarian values—into a small retail store.  It had concrete blocks and wooden planks for shelves, beaten up old second hand equipment, low ceilings, and painted concrete floors.  From those humble beginnings Down to Earth has grown and flourished to become an important part of Hawaii's community with five stores throughout the state (soon to be six with the opening of its new Kakaako location planned for late 2017 early 2018).  It employs almost 250 team members at five locations in Hawaii: Honolulu, Kailua, Pearlridge, and Kapolei on Oahu; and Kahului on Maui.  2016 is the tenth year in a row that Down to Earth has won the Star-Advertiser’s People’s Choice Award for Best Health Food Store.  For more information visit www.downtoearth.org