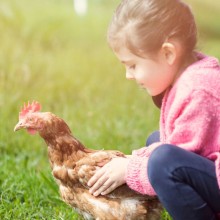 If you asked for vegan food at a restaurant 20, 10, or even five years ago, you’d be met with an eyeroll or confusion. Fast forward to now, and times have definitely changed. Hawaii has been found to be the most vegan-friendly state, with the highest number of fully vegan restaurants per capita of anywhere in the country. Preventing the exploitation of animals used to be the primary reason for going vegan; however, today the health and environmental impacts are also leading people towards eating a plant-based diet.

Animal Compassion — Be Kind to Every Kind 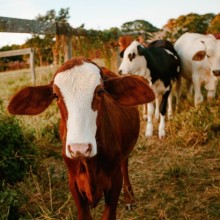 Every second roughly 1,800 animals, both land and sea, lose their lives in order to feed people. That adds up to over 55 billion animals killed to support the U.S. food supply every year.

Gratitude for Animals is a Necessary Part of Permaculture

A new book criticizing vegetarianism and veganism is making a splash in the UK.

Jonathan Safran Foer wants you to eat a dog

In the second chapter of Eating Animals, Jonathan Safran Foer tells the reader to eat dogs. His reasons are myriad: many cultures around the world have eaten them, and not a few still do. Millions of dogs are euthanized yearly in the United States, and their disposal is an economic and ecological problem. Dog meat is said to be tasty, and the surplus of dogs creates a cheap and easy food supply.

Your Health and the Environment

What we eat can cause or worsen diet-related illnesses and thus has a significant impact on our quality of life.

Virtually all the major scientific and medical institutions in the world agree that the risk of cardiovascular disease and stroke, obesity, osteoarthritis and osteoporosis, cancer, and diabetes, among other diseases is linked to a meat-based diet consisting of highly processed foods laden with fats and artificial ingredients. These institutions further agree that the risk is greatly reduced by adopting a healthy low-fat, high-fiber diet.

What makes it wrong, and the idea of it even repulsive, to eat a pet, but okay to slaughter other animals and put them on the dinner table or in our children’s lunch box? Our pets earn a special place in our hearts and often are treated as members of the family. Great efforts and expense are taken to see that they are kept safe, well-nourished, comfortable and happy.

I stumbled on a lovely volunteer organization called Animal Assisted Happiness, courtesy of a friend at the Care2 network.

In the Island Life section of the Honolulu Advertiser today (Wednesday, April 14, 2010) the main story was entitled "Buying the whole bird", which was about how to "enjoy value, freshness, versatility by learning to cut apart a chicken."  It was accompanied by pictures with captions like, "1.

When a sacrifice is necessary, what can we ask of others? What should we ask of ourselves?

Foer makes the case, in this final chapter of Eating Animals, that food is at the heart of the human dilemma. Eating is the most universal act, and its implications are far reaching. What we eat affects our relationship with our environment, our relationship with family and with our extended family – the other living beings that inhabit this planet. Food is a source of comfort for most people. We eat, many times, to resolve our anxieties. We eat to forge social bonds and to escape, temporarily, from the constant barrage of demands we face in life. Eating, then, is the activity which most calls on us to consult our conscience, and the activity we are least willing to examine.

An article in the Honolulu Advertiser today talks about aquaculture in Hawaii, and how various environmental groups are opposed to it on the basis that it is harmful to the environment. Aquaculture is another way of saying a fish factory farm, a large number of fish concentrated together in a sma